Randolph Fairfax: A Martyr for the Confederacy (created by Tommy Reilly '19) 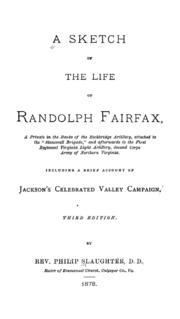 The title page of A Sketch of the Life of Randolph Fairfax published in 1864 by the Rev. Philip Slaughter, D.D. A Sketch is a glorified recounting of Fairfax's life leading up to his death at Fredericksburg. The following excerpts outline the morals he held dear and the passion with which he served. This piece of literature was written to boost morale within the Confederacy as the war began to become more of a lost cause. https://archive.org/details/sketchoflifeofra00slau 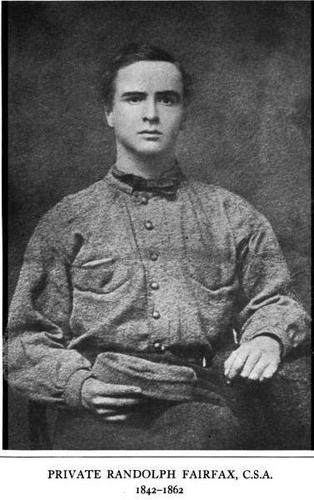 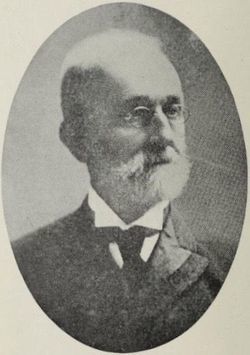 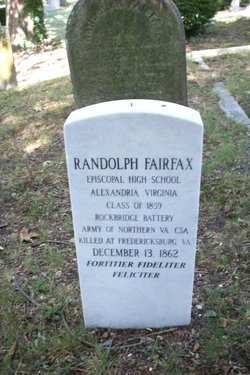 Fairfax's legacy was not only widespread throughout the Confederacy but also kept alive by those who knew him. While aspects of A Sketch of the Life of Randolph Fairfax seem exaggerated for purposes of propaganda, it is true that he was loved by many who knew him. This shows through his lasting legacy at Episcopal High School thanks to Launcelot Minor Blackford, a friend who served with Fairfax in the Rockbridge Artillery and went on to be the headmaster of Episcopal High School (1870-1913). Blackford created the Randolph Fairfax Medal, awarded to the graduating senior who the faculty feel best exemplifies character, conduct and scholarship. Fairfax's headstone also bears the latin phrase Fortiter Feliciter Fideliter which is Episcopal's school motto. His impact is still felt at Episcopal today, over 150 years later.