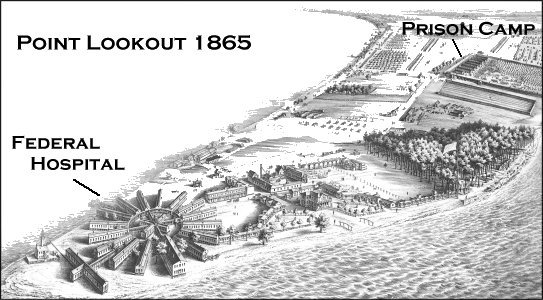 3 of the 21 Cavalry Officers who gave their lives for the Confederacy died as Prisoners of War here at Point Lookout, Md. Over 426,000 Confederate troops were held at some point in the war as POW's. Roughly 12% of these rebels died in captivity.

Roughly 20% of soldiers in the Confederate Army were members of the cavalry. Out of 63 graduates from Episcopal who were killed in action, 21 of them were in the cavalry, making up roughly 33% of KIAs from EHS. Furthermore, 14 of the 21 dead cavalry soldiers died between 1863-65 in the latter years of the war. These numbers reveal more than the high casualty rate in the cavalry. They reflect that casualties increased as the war went on. In the later years of the war the Union cavalry became significantly more agrresive. Utilizing their greater numbers, the Union was able to replace any casualties they had with able soldiers. The Confederates did not have this luxury and as the war went on their Cavalry grew weaker. The Union was also able to gain firepower that the Confederacy simply could not provide to its troops. Repeating rifles in the hands of Union cavalry gave them even more of an advantage over Confederates with an increased range to their rifles and a much greater rate of fire. In addition the Union cavalry's greatest advantage over Confederate units in the last years of the war was their commanding officer, General Philip Sheridan. Leading the Cavalry Corps of The Army of the Potomac, Sheridan decimated the remnants of the Confederate Army, being instrumental in General Robert E. Lee's surrender at Appomattox Court House. He capitalized on the dwindling leadership of the Confederate Cavalry, especially after J.E.B. Stuart's death at Yellow Tavern in May 1864, and was arguably one of the critical driving forces in winning the war for the Union.